It was a little’ I wanted to talk about the Urban Knitting which is also called Knitting Guerrilla o Yarn Bomb or a thousand other ways with different shades….

I wanted to talk about it because I find it a terrific seen that manages to combine the art of knitting and crochet (small trades considered household and individual excellence) the social struggle, the political battles and environmental, initiatives of solidarity to share.

In two words, it is knitting or crocheting done to decorate, color, beautify, places of the city often degradadati or to emphasize certain aspects of living in cities that do not work, making a social comment and creative non-violent.

It goes on the places that you want to decorate and is done, in the shortest possible time, even at night, so that the morning after those passing through that place remains astonished to see him so different and you stop to reflect on the reasons for color changes. Who cares about the main concepts of a deepening guerrilla kitting can read this interesting Article of greenMe the This beautiful post Cosmosicula.

If right now I decided to talk about this topic is for a reason.

After having so many experiences abroad, you are organizing an urban knitting even here.

It is not the first because several months ago took the initiative to life “Let a piece” to renew attention to the problems of the city of L'Aquila earthquake, that was a huge success and a large resonance, explains very well Roberta in his blog. 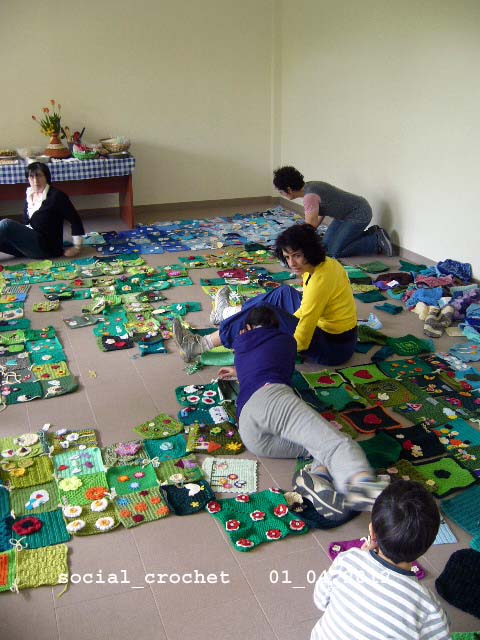 Today? Today there is another important issue at stake on Lake Como and we talk Elected as a site:

7 July 2011: endless rain causes a landslide that destroyed much of the center of a small town Como, Brienno (http://www.comune.brienno.co.it/). A whole house slips into the lake, a stone bridge disappears, a lathe is split in two. Fortunately there are not dead but, paradoxically, This will be the excuse of the institutions not to declare a state of natural disaster.

7 July 2012: A year after disaster, the country is still in the air. Who wants to contribute to color it with pieces and gave flowers Handmade?? 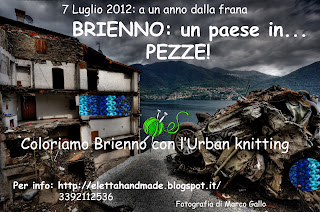 And so the Social Crochet* makes its appeal and presents the challenge of Brienno: to accomplish an urban knitting . Who wants partecipaere will make the pieces at home and send it to a crocheted Elected by the end of June. For the means of implementation and delivery visit his blog.

My crocheting is already at work…

*I intend to explain what the Social Crochet in a future post, because this reality, come l’urban knitting, deserves attention due to an initiative that elevates the art of crocheting small to house a large area of ​​socialization and sharing of social struggles.