I do with my hands: without the bread oven

After I published the photo on the net of one of my homemade bread, I have received many messages from people interested in the recipe and the procedure to obtain. I decided, then, to write a small post about it.

In practice, this is the second installment in the saga of the “tegame a gas” the pan with the hole that I could still use my grandmother. The first episode was about the Donut of roses without oven and as a result of that experience I tried a also bake my bread in the same way: ie without the use of the electric furnace.

The result was satisfactory. 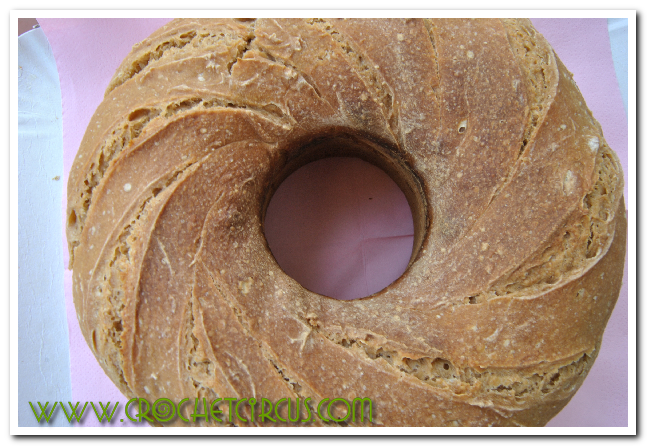 The recipe I used is this:

Ingredients for a loaf of bread from about 1,8 kg :

Mescolo the two types of flour with cold water (possibly taken from the fridge) and I make the dough, which remains rather coarse, half an hour.

I add the yeast refreshed three hours earlier, and salt and mix until a smooth batter that I leave to rise for about 5-6 hours (depending on the outside temperature) covered with a cloth moistened.

Resume the dough and do a series of folds to three (found Here a short video of how to make them, among many others in the network), then start to rise directly in the pan with the round hole, some call oven Versilia, other oven Hiking and others with different names still, however this is: 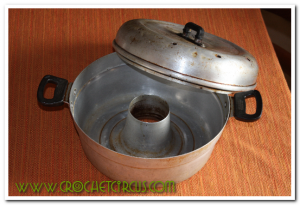 Be careful to grease the sides of the pan with oil or butter and flour them well before putting the dough, otherwise the bread will stick to the walls.

I rise other 5-6 hours out of the fridge or 12 ore in frigo, always covered with a cloth moistened.

I remove from the fridge, I rest a half hour, I make the cuts on the surface with a razor blade and put it on the gas. Along with the pan also will sell you a special spreader round, to be placed on the stove. Put the pan on a stove to medium in size and given the maximum flame for about 8-10 minutes, then reduce to low and simmer for another 50 minutes checking, towards the end of cooking, that the bread does not tan too. You can just open the lid of the pan past 40 minutes into the cooking, because the bread is not as delicate as a sweet…..

What you get is this: 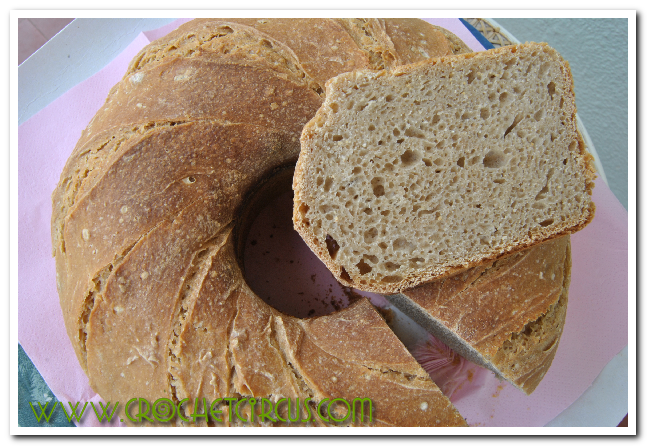 It’ a tasty bread and similar to what can be in the oven at home, even if the outer crust is much thinner. It gave me a lot of satisfaction more than anything else because I was able to get my homemade bread while on vacation where I did not have electric oven. It is also an excellent solution for the summer periods during which you do not want to overheat the kitchen…..

The pan in question is found in almost all stores of kitchen items and does not cost much. It's worth a try.